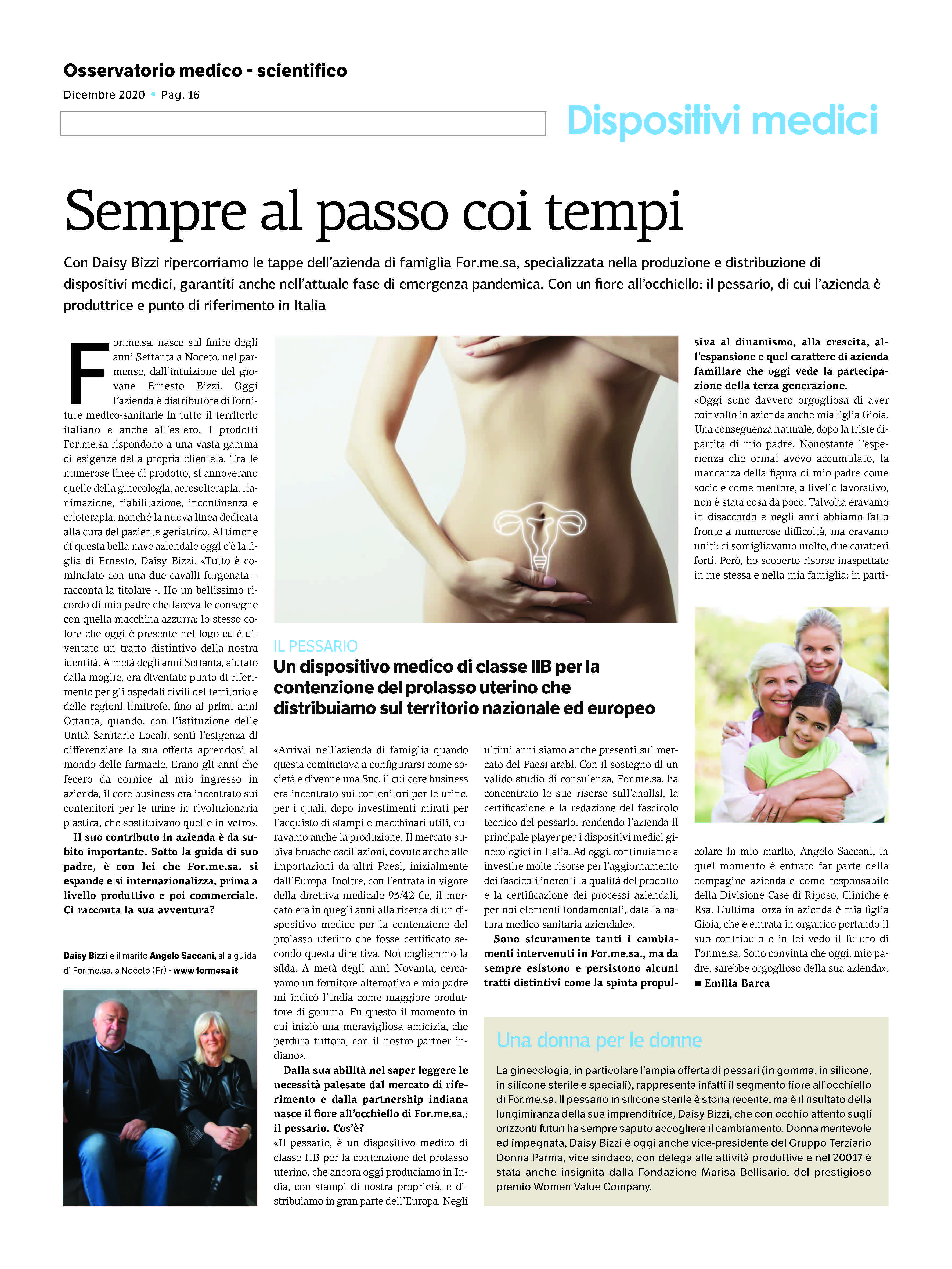 For.me.sa. was founded by the young Ernesto Bizzi at the end of the Seventies in Noceto, close to Parma…

The company, wholesaler of health and medical devices, works on national and international market. For.me.sa. product portfolio meets a wide range of customer’s needs; indeed, the main product lines are those of gynecology, aerosol therapy, resuscitation, rehabilitation, incontinence and cryotherapy, as well as the new line dedicated to the geriatric patient. Daisy, Ernesto’s daughter, helmed today the company. «It all started with a “Due Cavalli” van – she tells -. I have a wonderful memory of my father making deliveries with that blue car: the same color of the current logo that has become a distinctive feature of our identity. In the mid-1970s, helped by his wife Alberta, Ernesto and its company became a reference point for civil hospitals in Emilia Romagna and bordering regions. In the early eighties, with the establishment of the Local Health Units, Ernesto decided to diversify the product portfolio by starting to supply the pharmacies as well. I joined the company in those years when the core business was the urine containers in revolutionary plastic, which replaced those made by glass».

Her contribution was perceived as important early on. Under the father’s leadership, it was thanks to you if For.me.sa. started to expand and internationalize, first at a production and then at a commercial level. Can you tell us about her adventure?

«I joined the family business when it became a Snc, whose core business was the urine containers. We made targeted investments for the purchase of molds and machineries in order to start the production. The market underwent sharp fluctuations, also due to imports from other countries, initially from Europe. Furthermore, the market was looking for a medical device for the containment of uterine prolapse that was certified according to with the Medical Directive 93/42 CE. We took up the challenge. In the mid-nineties, we were looking for a new supplier and my father suggested me India as the largest producer of rubber. This was the moment when he began a wonderful friendship, which continues to this day, with our Indian partner».

From her ability to know how to read the needs of the market and the Indian partnership born the flagship of the company: the pessary. What’s about it?

«The pessary is a class IIB medical device for the containment of uterine prolapse, which we still produce in India, with our own molds, and we distribute in Europe. Recently, we have also supplied the market of Arab countries. With the support of a quality consulting company, For.me.sa. has concentrated its resources on the analysis, certification and drafting of the pessary’s dossier, making the company the main player for gynecological medical devices in Italy. To date, we still invest in the quality of our products and in the certification of business processes, which are essential elements for us, due to the company’s medical health nature».

Many changes happened in For.me.sa., neverthless some aspects, becoming the distinctive features of the company, have always existed and go on as the driving force of it. I’m talking about the dynamism, the growth, the expansion and that nature of a family business that today host the third generation.

«Today I am really proud to have also involved my daughter Gioia Saccani in the company. A natural consequence, after my father’s sad passing. Despite the experience that I had accumulated by now, the lack of my father as a partner and as a mentor, at work level, was not a trivial matter. Sometimes we disagreed and over the years we faced numerous difficulties, but we were united: we looked like, both strong characters. However, I have discovered unexpected resources in myself and in my family;  in my husband, Angelo Saccani especially. When he joined the company, he develop a new Department along with the historical one of Wholesalers and Pharmacies: the Nursing Homes Department. The latest company’s strength  is my daughter Gioia, who joined the staff bringing her contribution and in her I see the future of For.me.sa. I am convinced that today, my father, would be proud of his company ».

They tell about us